Madison Aquatic Center not likely to open this summer 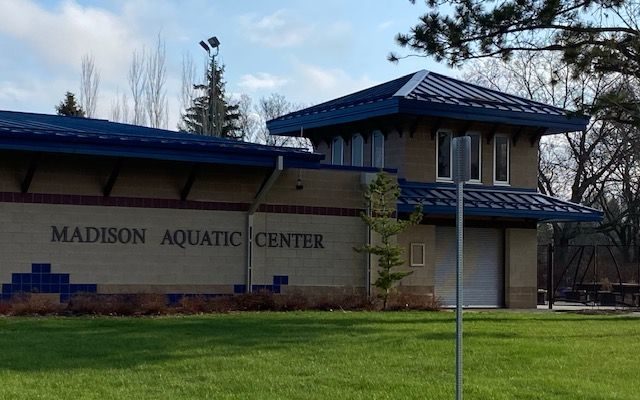 While the city continues to wait on materials and someone to do the repair work on the Madison Aquatic Center, city commissioners on Monday discussed the likelihood that the pool would not be able to be open this summer.

The commission last week approved a quote for electrical components for the Aquatic Center from Malloy Electric of Sioux Falls, with the delivery of the materials expected to be within the next six weeks.  Utilities Director Brad Lawrence told commissioners Monday that from the time that Malloy provided their quote and when they were notified that it had been approved, that they pushed the delivery date back to eight weeks instead of six.

Lawrence said they have not been able to find anyone who will sell them a boiler directly either, but said that wasn’t as essential right now as the other components.

Lawrence also said he invited four different contractors to make proposals on doing clean-up work to see if they could get the pool up and running sooner.  He said that two of them looked at it and said they wouldn’t quote it, but the other two said they would and didn’t send anything back to him before the meeting.

City Administrator Jameson Berreth said that after all that has been happening and with the delays, he advised commissioners to not open the pool this summer and focus more on other activities that can be put together for the kids in the community.

Berreth suggested that the city look into opportunities like partnering with businesses to help possibly provide busses for kids to go to pools in neighboring communities or other ideas.  He said that the city can then focus on doing the work on the Aquatic Center safely and correctly for the future.  Berreth said that staffing would also have been a significant challenge.

Commissioner Kelly Dybdahl said that he’s not ready to give up on the project just yet.  He said he didn’t think that the city gave electricians much time to see what they could possibly do with it.

A former city aquatics director, Carol Shaver, addressed commissioners Monday and said that she was happy to hear that they weren’t going to try to open the pool this summer considering all of the circumstances.  She said that commissioners need to look at the entire operation of the pool going forward and have the right people, policies and procedures in place.