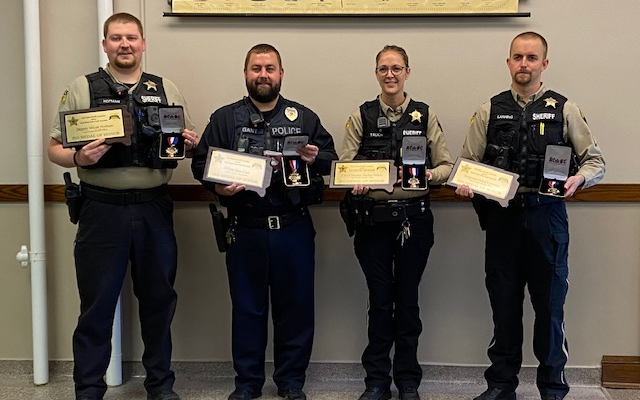 The Lake County Commission recognized several county employees during its meeting on Tuesday.

Sheriff Tim Walburg told commissioners about four law enforcement officers who were recently honored at a joint conference of the South Dakota Police Chiefs’ and Sheriffs’ Associations.  Walburg said that the group’s Medal of Honor was presented to Chief Deputy Sarina Talich, Sergeant Grant Lanning, and Deputy Micah Hofman, along with Madison Police Officer Ben Gant for their work with an incident in Madison in September of 2020.

Walburg said the Medal of Honor is for law enforcement officers who willingly distinguish themselves through an act of courage, involving a risk of imminent serious injury or death, for the purpose of saving or protecting a human life or while taking an armed and immediately dangerous suspect into custody.

Also on Tuesday, county commissioners acknowledged Talich, Lanning, and Ashley Allgaier for completing the High-Performance Leadership Academy.  The Academy was a twelve-week online program offered through the National Association of Counties.

County Highway Foreman Tim Tolley was honored by commissioners Tuesday as well as part of the county’s annual employee recognition for fifteen years of service with Lake County.