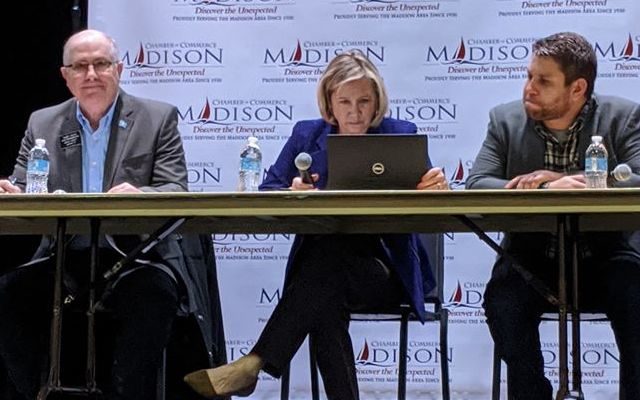 A variety of issues were presented to District 8 legislators on Saturday as part of the Madison Chamber of Commerce’s annual Legislative Cracker Barrel.  District 8 Senator Jordan Youngberg, along with Representatives Marli Wiese and Randy Gross took questions and heard concerns about legislation during the cracker barrel held at the Madison High School Auditorium.

One of the bills the legislators addressed is House Bill 1008, which would legalize the growth, production, and transportation of industrial hemp in the state.  The bill passed out of the House Ag and Natural Resources Committee last week and moves next to the House floor.

Representative Gross was a member of the Industrial Hemp Study Committee that met this past summer to discuss the issue and who have sponsored the bill this session.  He told those attending Saturday’s event that industrial hemp was legalized in the 2018 Farm Bill and explained some of the issues the state is facing with that.

Senator Youngberg said he was a sponsor of the legislation last year to legalize industrial hemp, which Governor Kristi Noem vetoed.  He said he’s more confident in this year’s legislation, which addresses most of Noem’s concerns.

Representative Wiese said she would like to see all of the issues that need to be addressed included in the legislation.

The legislators also fielded questions Saturday on bills regarding education, medical, agriculture, and taxes, among other issues.  The legislators also asked those in attendance for feedback on different pieces of legislation. Gross, Wiese, and Youngberg all encouraged the residents of District 8 to continue to contact them with any questions or concerns about proposed bills and legislation.