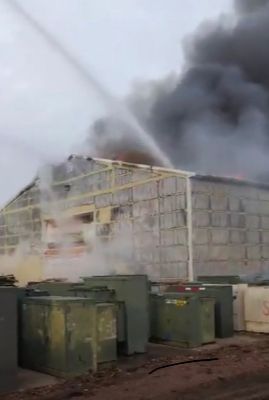 Fire destroyed or damaged several buildings at T&R Electric in Colman Wednesday morning.  Madison Fire Chief Randy Minnaert said the Madison Fire Department got called to help out with the fire around 5:30 Wednesday morning, but he said that some other departments were on scene before that.  Minnaert said that four buildings were damaged in the fire, three of them with major damage.

Minnaert said at least nine different area fire departments were on scene at T&R Wednesday morning, with more than 25 fire trucks, including four aerial trucks.  He said that trucks had to go to Dakota Ethanol and then also to Madison for more water to fight the fire.  The City of Colman had asked residents there to conserve their water usage today so more would be available for the firefighters to use on the fire.

The cause of the fire is under investigation.

Video of some of the firefighting efforts from earlier Wednesday morning can be found on the Madison Fire Department’s Facebook page.