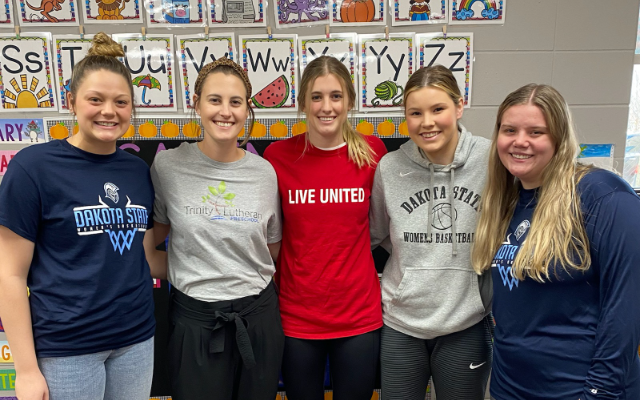 A recent fundraising event helped raise money for local preschools. The Dakota State University women’s basketball team partnered with the Interlakes Area United Way in this effort.  The team hosted a Bingo game at two DSU volleyball games and was able to raise more than nine-hundred dollars for preschools in the area to use toward supplies for their classrooms.

The Interlakes Area United Way is a non-profit organization that coordinates financial and volunteer resources for other non-profit agencies in Miner, Lake and Moody Counties. As an intern for the organization, DSU student and women’s basketball player Jessi Giles was able to connect the United Way with the basketball program to set up and coordinate the fundraiser.

The fundraising event was held in October at the DSU Fieldhouse during the university’s home volleyball games. Those in attendance at the game were able to purchase Bingo cards from the basketball team and play along throughout the match. There were two winners each night who took home $25 gift cards that were donated by Casey’s in Madison.

The funds raised were also matched by FirstLine Funding Group in Madison.

The money raised will be split evenly between the preschools in Madison for them to purchase supplies as needed.