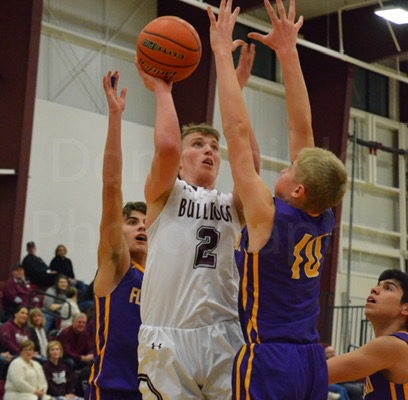 The Madison boys overcame some early shooting woes on Thursday night to take down the Flandreau Fliers, 58-42. Flandreau got a strong start from Tash Lunday, who scored all of the Fliers 11 points in the 1st quarter. Still, Madison took a six point lead after the 1st, and while the Bulldogs couldn’t pull away they also lead nearly the entire game.

Madison is now 6-1 on the season, after winning their 4th game in a row. Flandreau falls to 5-4.

The Bulldogs JV team was also a winner on Thursday, 56-34 over Flandreau. Dillon Bickett scored 12 points for Madison. Gabe Olson added 9 while Adam Roemen and Trey Smith each had 8. Eight players in total scored for the Bulldogs, as they got back in the win column after a loss earlier in the week to Watertown.