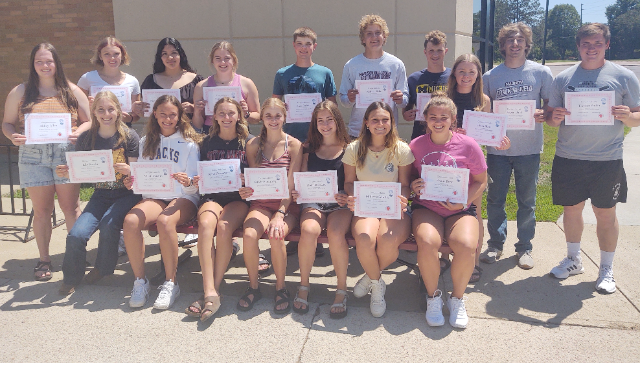 The scholarship recipients include MHS graduates Nathan Ricke, Alison Vacanti, Olivia Flemming, Abigail Morse, Peyton Wolf, Makira Wrage, and Katharine Comes, who are all attending South Dakota State University.  Also, Fiona Donelan, who is attending University of Wisconsin-River Falls, Alexandra Gutierrez, who will attend Southeast Tech, and Trey Smith and Kylie Krusemark, who are attending the University of South Dakota.  Other Evelyn Krueger Jones Scholarship recipients from Madison are Elijah Olson and Eleni Sims, who are attending the University of Sioux Falls, Aspen Dahl, who is going to Mount Marty University, and Bella Maxwell and Alex Ersland, who are both attending Dakota State University.  Also receiving the scholarships are MHS graduates Mallorie Schultz, Abbey Allen, and Raena Rost, all attending Augustana, and Lily Sunde, who is staying at home to work on the family farm.

Evelyn Krueger was a member of the Madison High School Class of 1930.  After graduation, she obtained her teaching certificate at Eastern State Normal School and taught for one year in Junius.  She earned a B.S. degree in library science from George Peabody College in Nashville, Tennessee, and a B.S. in nursing from Yale University.  Evelyn married Frank Jones and settled in Delaware where she worked as a teacher, librarian, and nurse there and in Washington, D.C.  Three years after her husband’s death in 1996, Mrs. Jones moved to Bethel Lutheran Home in Madison, where she passed away on September 28, 2001.  The couple had no children and were philanthropic, giving back to their communities to support causes they felt were important, such as higher education.

The Madison Central School Educational Foundation was one of the recipients of the couple’s philanthropy.  The Evelyn K. Jones Endowment’s earnings are used to fund these scholarships in her name.