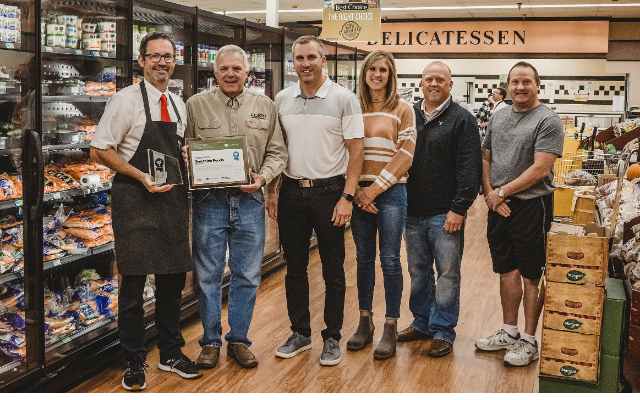 A Madison business is being recognized for its energy efficiency.  Heartland Consumers Power District recently presented Sunshine Foods of Madison with the Excellence in Energy Efficiency Award.

Sunshine Foods owner Dan Roemen said he started making upgrades to the store several years ago, which resulted in a 27-percent reduction in the store’s electricity usage.

One of the changes Roemen made was replacing fluorescent lights with LED bulbs.  He also upgraded coolers, fridges, and freezers, and installed units with doors in the produce section to contain the cool air.  A controller to run the refrigeration system more efficiently was also installed.

Since beginning improvements in 2013, Roemen has saved around 30-thousand dollars annually in his electric bill, or a reduction of around 27-percent.

Madison’s Utilities Director Brad Lawrence said that Sunshine is one of the top ten highest consumers of electricity in the city.  He said that by lowering their consumption, they help reduce the city’s peak.

Heartland presented the award to Sunshine in conjunction with Public Power Week this week.  The week is designed to celebrate the advantages of locally owned, non-profit utilities.