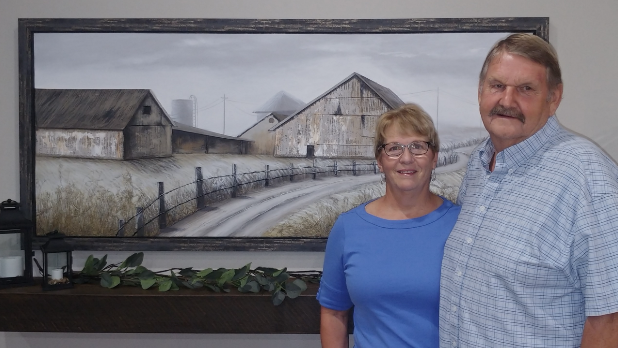 Dakota State University in Madison has named a Ramona area couple as the Honorary Ag Bowl captains for this year.  Dan and Linda Stewart have been farming together for 45 years.  Because of their contributions to farming, and their connections with Dakota State, the Stewarts have been named Honorary Ag Bowl Captains for 2021. The 6th annual Ag Bowl is slated for this Saturday, September 18th, against Presentation College.

Dan went to Dakota State, graduating with an elementary education degree in 1972, but chose to come back to the family farm. The family farms around one-thousand acres, and used to have cattle, hogs, and some sheep, but now focus on corn and soybeans.

Two of Dan and Linda’s sons also went to Dakota State. Chris graduated with an associate degree, and now lives in Brandon; Jason completed a marketing degree in 2007, and he lives in Madison, where he has his own marketing company. Son Kevin served in the Marines, and is now a firefighter in Arizona.

DSU’s Ag Bowl kicks off at 4:00 p.m. on Saturday at Trojan Field in Madison.