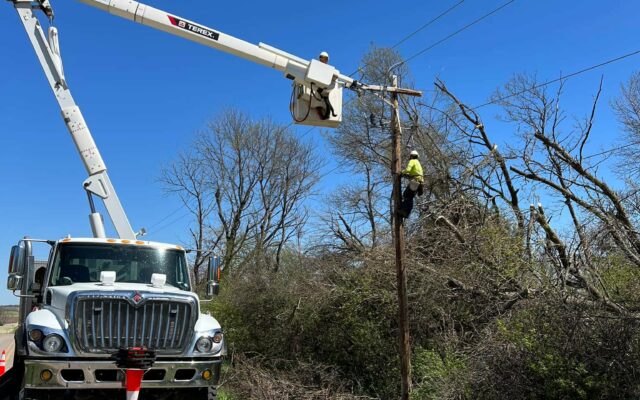 Sioux Valley Energy and additional personnel from other co-ops and contractors continue to work on repairing and restoring power to its customers.  Ted Smith, Sioux Valley Vice President of Engineering and Operations, said they have never fought storm conditions like this before.  He said they are basically dealing with a damage path 50-miles wide and 100-miles long.  Sioux Valley reports that the swath of damage caused by the derecho is more widespread than ice storms or tornadoes.

Sioux Valley CEO and General Manager Tim McCarthy said in a Facebook video on Sunday afternoon that it is going to take a while to get the work all done because of the extent of the damage.

McCarthy said he appreciates everyone’s support and patience as they work to try to get power back to everyone as soon as possible.

As of this morning, Sioux Valley Energy had just less than 500 members still without power.  According to its Facebook page, there are currently 65 separate outages and most of the work will focus on the Brookings, Kingsbury, and Lake County areas.

On Sunday, East River Electric Power Cooperative restored power to all of the cooperative’s wholesale  power supply substations after severe weather caused extensive damages on May 12 throughout much of eastern South  Dakota and western Minnesota. East River Electric’s wholesale power supply service area covers eastern South Dakota  and portions of western Minnesota, and high winds damaged the utility’s transmission power lines and substation  infrastructure across much of their system. Although East River has reenergized its substations, some member  consumers may remain out of power until their local distribution cooperative is able to repair power lines damages to  their local distribution system.

At the height of the event on Thursday evening, 56 East River Electric substations as well as seven municipal customers  served by East River were out of power across the cooperative’s service area. East River had over 200 transmission  structures damaged spanning a range from Yankton, SD to Dumont, MN. Repairs will continue on those broken  transmission power line structures over the coming days. The cooperative’s transmission system is built such that, even  if a transmission line is out of service, power can be rerouted to prevent power outages while the lines are being  repaired.

“Thank you to the region’s cooperative consumers for your patience and understanding as we worked over the past few  days to repair damages and restore power throughout the region,” said East River Electric General Manager and CEO  Tom Boyko. “I would also like to thank our teams for their incredible work and dedication to safely restore our system  following this severe weather event. As an example of the dedication shown by East River’s employees, in just a 12-hour  span on Friday, employees energized 24 substations and restored power to more than 8,000 member consumers.”

The cooperative is reminding the public to never approach downed or damaged power lines and to always treat  damaged lines as if they are energized.