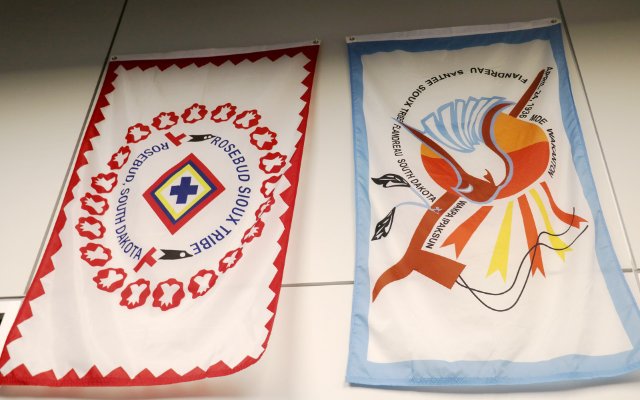 Flags representing South Dakota’s Native tribes are on display in the Trojan Center.

November is Native American Heritage Month, and Dakota State University’s Native American Student Association Club has several events planned for the observance. DSU students, faculty, staff, and the community are invited to attend any or all of these events, which bring awareness to the importance of Native Heritage.

NASA Club co-advisor Rob Honomichl, an Assistant Professor of Computer and Cyber Sciences at DSU, said Native heritage provides an important historical and cultural perspective for those on campus, as well as those in the community.

Other upcoming events include  an artist on Monday, November 22nd.  Jennifer White, an Arikara visual artist, painter, and Post Pilgrim Gallery owner, will present her paintings and talk about her experience at 7:00 p.m. next Monday in the TCB Auditorium on the DSU campus.

On Monday, November 29th, the Wakpa Ipaksan Youth Drum Group from Flandreau will be on campus at 7:30 p.m. in the Trojan Center Marketplace.

The NASA Club is also planning a couple of events for December and again in the spring semester.

Upcoming events this month include:

There are also two events in the planning stages for December. One is a Native Star Knowledge Stargazing event, with DSU’s Dr. James Maloney and Dr. Craig Howe of the Center for American Indian Research and Native Studies (CAIRNS). On December 14, Dakota State again plans to host the Dakota 38+2 Riders with a meal and welcoming ceremony for the riders and members of the community in the Trojan Center. Watch for more details on both these events.

In addition to the fall events, the NASA Club has several events in the works for spring semester, including an event in conjunction with the Missing and Murdered Indigenous Women cause.