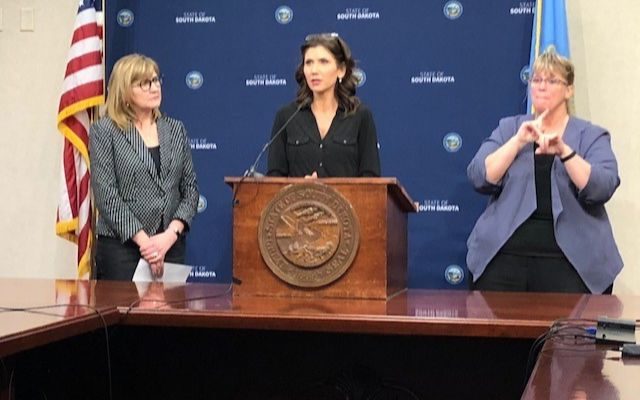 As more than three-thousand people who are either Smithfield Foods employees or family members have gone through a mass testing site in Sioux Falls, Governor Kristi Noem said that the state is going to see a bigger increase in positive COVID-19 cases.  But the governor said Thursday that that isn’t necessarily a bad thing.

State Department of Health Secretary Kim Malsam-Rysdon said that Thursday was the last day of the mass testing site for Smithfield employees.  She said after that, anyone from the plant needing to be tested will need to go to the Avera Clinic on Marion Road in Sioux Falls.

Malsam-Rysdon said that the state is not testing anyone from Smithfield who has previously tested positive during this time.

Several residents at some nursing homes and other care facilities in Sioux Falls have tested positive for COVID-19 and several have died from the virus.  Malsam-Rysdon said Thursday that they have been working with these types of facilities across the state.

Malsam-Rysdon said that mass testing in these types of facilities is not effective.

As of Thursday, 31 people in the state have died from COVID-19.  The Good Samaritan Society reported this week that 15 residents in its Sioux Falls Village nursing home facility had died after testing positive for the coronavirus.  One resident of the Avera Prince of Peace Retirement Community in Sioux Falls died last month from COVID-19.