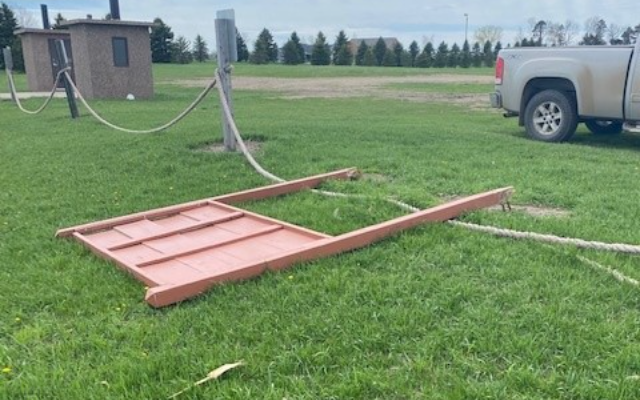 Lake County Highway Superintendent Nels Nelson and Buildings and Grounds Supervisor Dave Hare reported to Lake County Commissioners Tuesday the extent of damage they are dealing with throughout the county and the means in which they are handling the clean-up of it.

Nelson told commissioners that there are a few areas hit the hardest as far as tree damage.

Nelson said after working in these two areas, the county will move on to Winfred to clean-up trees there.  He said that they are working with the city to use the Restricted Use Site for tree debris, but he’s also been in contact with someone to temporarily stockpile trees in a pasture if needed.  Nelson said there’s also lots of steel in the county’s rights-of-way.

Nelson said it’s a slow process and told the commission that it would be helpful for the county to have a side dump truck to help in hauling the trees.  He said currently they have two contractors helping to haul trees.  Commissioners had Nelson look into the cost of purchasing a side dump, and he found that there are a couple of used ones available for under 50-thousand dollars.  Commissioners approved Nelson to spend up to 49-thousand-950 dollars for a side dump for the county.

Nelson said that the Highway Department’s shop received damage to its doors and sheds, and also to the county’s shop in Ramona.  He said there are also a lot of signs down in the county.

Along with the damage at the Highway Department shops and quonset building, County Buildings and Grounds Supervisor Dave Hare said that there is extensive tree damage at the 4-H grounds and several of the barns will need to be re-shingled.  He said that the county had tree damage on the south side of the courthouse, and also at its public beach, where a picnic table and sign were damaged.  Hare said that there is significant damage within the shelterbelt there also, and overall it’s hard for his minimal staff to take care of on their own.

Hare requested commissioners to approve the purchase of a grapple bucket to put on their skid steer to help in cleaning up the tree debris.  He said he found one for around 32-hundred dollars, and due to the need for storm clean-up, commissioners approved the purchase for up to 35-hundred dollars.  Hare said that he will also check with the City of Madison on contacting the company they are hiring to help clean up the city’s parks to possibly also have them do the work at the courthouse and 4-H grounds while they are in town.