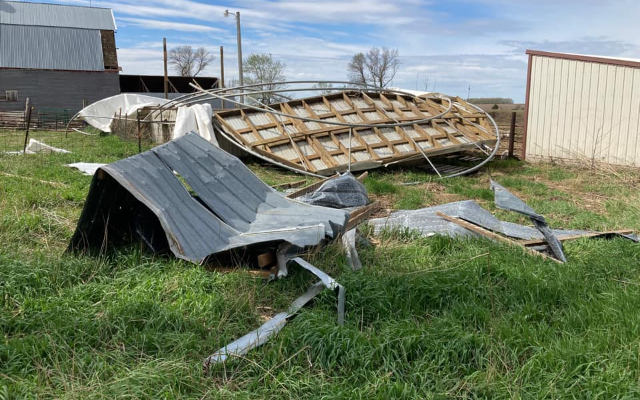 Photo of damage to a farm in Lake County, submitted by Jane Eilertson to KJAM Radio Facebook page

The Lake County Commission has approved a resolution declaring a disaster in Lake County because of the widespread damage throughout the county caused by the May 12th storm.

Commissioners on Tuesday approved the resolution for the disaster declaration, which requests the governor to declare a disaster area and to request a Presidential Declaration of Disaster to ensure that the maximum amount of assistance is made available to local governments, businesses and residents affected.

During their meeting Tuesday, commissioners heard from Emergency Manager Kody Keefer.  He said that the county and the city operated a joint emergency operations center for about twenty hours after the storm Thursday through Monday morning.  Keefer said that they continue to receive damage reports through 211.

Keefer said that they have had 32 people request assistance with clean-up and he’s been working with the Samaritan’s Purse organization to work with them to try to get them the help they need.

Ninety-eight members of the South Dakota National Guard were in the Madison and Ramona areas on Friday helping with storm clean-up.  Keefer said that there were also Wildland Fire personnel helping out in Winfred Township, getting the debris removed from roads and other public property.  He said that the amount of debris so far supports the county’s disaster declaration.

Keefer said that some areas of the county were also without power for around 72 hours after last Thursday’s storm.  He encourages residents throughout the county to contact 211 to report the damage to their home or property, as damage assessments are important for the disaster declaration process and the types of eligible assistance that may be made available.