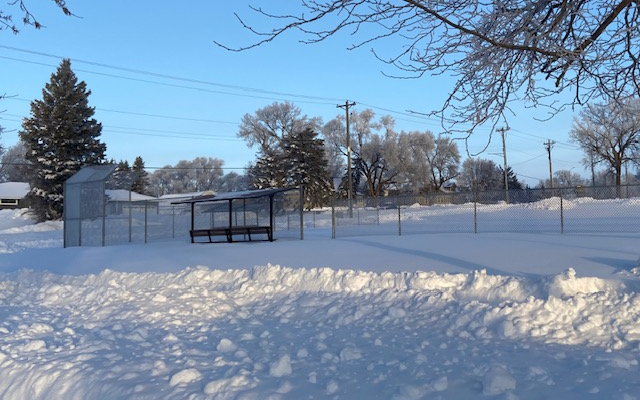 LAIC is proposing building a daycare center on this property at the intersection of Highland Avenue and West Center Street in Madison. -KJAM Radio/AlphaMedia

Lake Area Improvement Corporation Executive Director Brooke Rollag has said that the group’s primary initiatives are housing and daycare.  On Thursday, she pitched an idea to Madison City Commissioners regarding a potential location for a new daycare center in the city.  Rollag said they are interested in utilizing the city’s property along North Highland Avenue where there is currently a small baseball diamond located.  She said that after exhausting a number of other options, this park area rose to the top of the list.

Rollag said that more information about the LAIC’s purchase of land to the west of Highway 81 will be forthcoming, but she said that it makes it possible to do a land swap in order to locate the daycare center where kids have access to more of the city park amenities and the Madison Aquatic Center.

Madison Elementary Principal Janel Guse joined Rollag in meeting with commissioners and said that having a playground already in place that’s ADA compliant is a big plus to the proposed daycare center location over an undeveloped site.

City Parks Supervisor Mike McGillivray said that the small baseball diamond is utilized a couple times a week in the spring for practices, but can’t be used for games more than tee-ball.  He said that the Thue complex is available also for teams to practice.

When asked about how big of a daycare center they are looking at building, Rollag said that ideally they would like to have room for 100 kids, but she said that they would need the workforce in order to do that.  She said that finding a location for a facility is just the first step in the process.

City Administrator Jameson Berreth said that with the commission’s support of the proposed location of a daycare center, they will look to the city’s Park Board and the public for input on it.  He said it will be back on the agenda for the commission’s next regular meeting on January 17th.