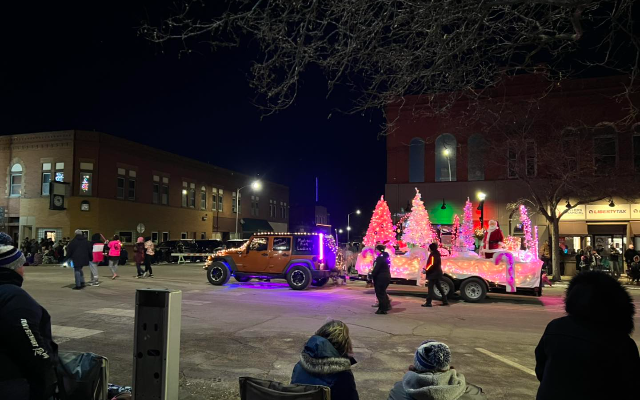 Egan Avenue in downtown Madison was lit up with holiday spirit on Saturday night as the community turned out for KJAM’s first ever Parade of Lights in Madison.  The Parade included more than 40 entries, with everything from horses and trucks to large equipment, trains and floats.

Awards were presented at the conclusion of Saturday’s Parade during the Community Tree Lighting.

Judged “Most Beautiful” in KJAM’s Parade of Lights was the float by the Madison Area Pink Ladies, while the “Most Creative” went to Kibble Equipment’s Rein “deere”.  The award for “Best Use of Lights” went to B&G Trucking, and “Most Humorous” was presented to East River Electric.  The “Mayor’s Choice” Award went to Running’s “Grumpy Old Men” float, while the Lebahn Family Train received the “Sweepstakes” Award.

KJAM thanks all of the sponsors and those who took part in Saturday’s parade and are looking forward to the 2nd Annual Parade of Lights in 2023.