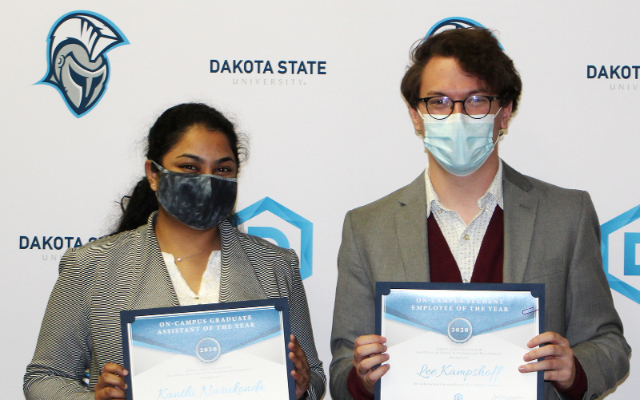 Kanthi Narukond, Graduate Assistant of the Year, and Lee Kampshoff, Student Employee of the Year

A Dakota State University student from Salem has been named the university’s On-Campus Student Employee of the Year.  Lee Kampshoff recently received the honor after being nominated by members of DSU’s College of Arts and Sciences.

Kampshoff has served as the front office staff in DSU’s College of Arts and Sciences during his college career, and was chosen for his characteristics of being conscientious, kind, and personable. He is a Digital Arts and Design-Computer Graphics major from Salem.

Other awardees include off-campus employee of the year Xitlali Lopez, who works at Madison Physical Therapy, and Kanthi Narukonda, Graduate Assistant of the Year.