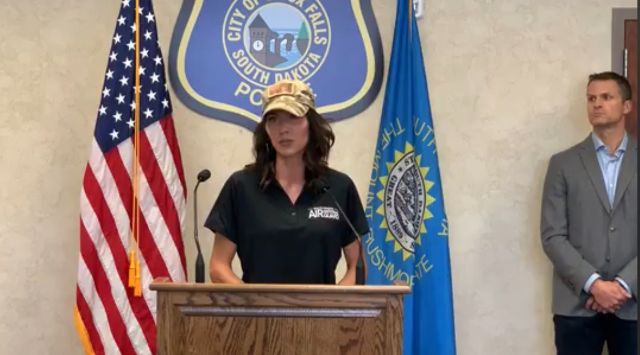 Governor Kristi Noem visited Sioux Falls Monday afternoon, meeting with city officials and touring some of the areas hit by what she calls “violent criminals”.  In a news conference Monday, Noem said that she supports the peaceful protest that was held Sunday evening over the death of George Floyd in Minneapolis at the hands of a police officer last week, but not the rioting and criminal behavior that took place after that near and around the Empire Mall.

Noem said that residents and government officials need to work together to find solutions to the problems.

The governor said that she is willing to help champion common sense solutions to what South Dakotans want to happen in the future.

Shortly after the protest took a violent turn at the Empire Mall Sunday night, Sioux Falls Mayor Paul TenHaken declared an emergency and set a curfew in the city and Governor Noem activated the South Dakota National Guard.  She said the Guard remains on state active duty and are prepared to help out if needed in any part of the state.

Mayor TenHaken said Monday that more people are being prosecuted for their actions on Sunday night.

Governor Noem said that there are planned protests in other cities in the state and that while she hopes they stay peaceful, law enforcement is ready to act when and wherever necessary.

Peaceful protests were held in Pierre and Aberdeen on Monday evening.