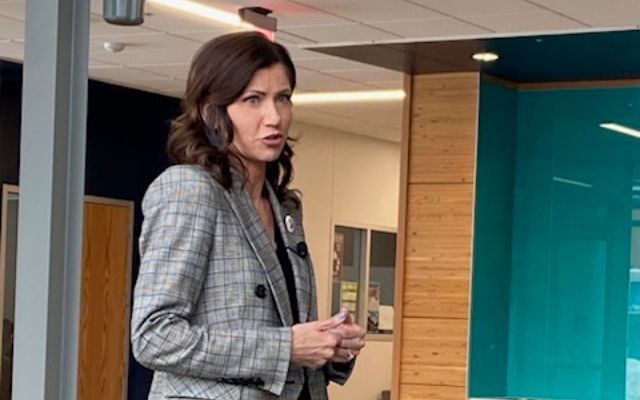 Just one week out from delivering her State of the State Address to state lawmakers, Governor Kristi Noem stopped in Madison Tuesday to give an update on her plans for the next year and growing the state’s economy.  Noem spoke in the Beacom Institute of Technology on the campus of Dakota State University in Madison Tuesday afternoon.

Noem outlined what she calls her four pillars, one of which is keeping a favorable tax environment in the state.

Also on Noem’s list is to keep a low regulatory environment in the state, to continue to fight federal government intrusion, and to have an open and honest state government.

One of the areas that Noem pointed out that she’d like to see more career opportunities in is in technology and cybersecurity, something that DSU will be a part of.

On Tuesday, Noem also talked about a broadband package that was approved last year that is helping out rural communities in the state, and the expansion of some economic development programs to help with housing needs.

The governor yesterday also talked about industrial hemp, the state’s meth campaign, agriculture, and other priorities for the state if there are more revenues available when approving the state’s budget.