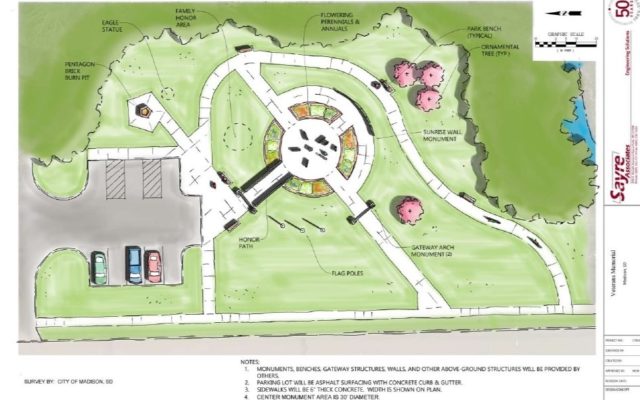 A fundraising campaign is underway to build a Veterans Honor Park in Madison.

The Veterans Honor Park will be built on land along South Washington Avenue in Madison across from Lewis Drug.  The land was donated by Jerry and Sue Larsen.  The donated land is to be used to build an area to honor past, present and future veterans and their families.

Both the Ronald Westby VFW Post and the McKibbin-Mosher American Legion Post of Madison are joining together in the effort to raise money for the park.  The goal for money raised is one-million dollars.

The most recent fundraising effort involves a GoFundMe page, established by Danny Frisby-Griffin.

Donor levels above 500-dollars will have their names permanently etched on the polished granite donor wall.  Families can also purchase one of two special benches to honor an individual veteran or family. There are two benches available for five-thousand dollars each.