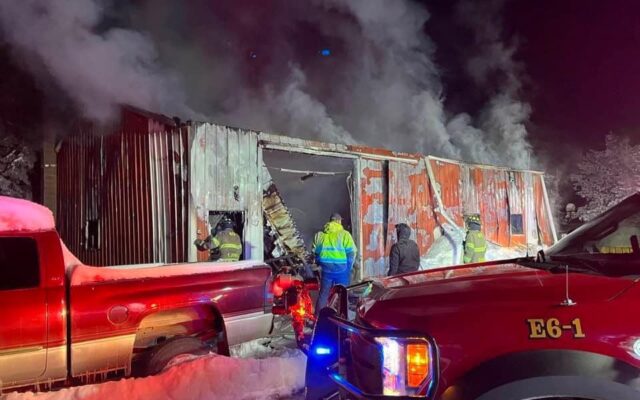 A building in Lake County was destroyed by fire on Saturday afternoon.

Lake County Emergency Management reported that the structure fire was reported just before 4:20 Saturday afternoon.  The fire was in a steel building and shop-house near 463rd Avenue and 241st Street, just a quarter mile south and west of Chester.

Emergency Management reported that Lake County 911 issued a county-wide “all-call” for the fire, meaning all five county five departments were asked to respond.  Along with those, mutual aid was also provided by Colton and Dell Rapids departments.

Two people who lived in the structure went in to try to retrieve vehicles and equipment and were treated for smoke inhalation on scene by Madison Ambulance personnel, and later sought further treatment at the Madison Regional Health Emergency Room.  None of the first responders were injured in battling the fire.

Emergency Management said that fire personnel encountered brutal cold and limited space to maneuver fire units when fighting the fire.  Fire personnel were able to limit the fire’s damage to the structure, but the building and its contents were a total loss.  This included living space for the property owner.

Emergency Management put the Red Cross in contact with the property owner for additional services.

Along with all of the fire departments, Madison Ambulance and Red Cross, the Lake County Sheriff’s Office also responded to Saturday’s fire.

More information can be found here: