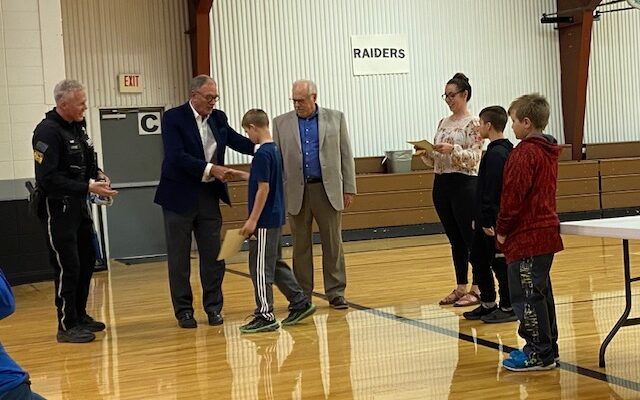 It was graduation day in December for some Oldham-Ramona students on Thursday.

Ten 5th and 6th grade students from the school graduated from the EMPOWER program.  The EMPOWER program is presented by Lake County Sheriff’s Deputy Steve Rowe as part of his work as the county’s School Resource Officer.  Rowe presents the drug awareness program to students for nine weeks leading up to graduation.

Former NFL quarterback Neil Graff was the keynote speaker for Thursday’s program.  Graff graduated from Sioux Falls Lincoln High School before attending the University of Wisconsin to play football and then was drafted by the Minnesota Vikings.  Graff was a back-up quarterback for the Pittsburgh Steelers, playing behind Terry Bradshaw, in the 1970’s and was on one of the Super Bowl teams.

Graff told the students that they each have their own talents and they should work hard to make the most of it.

Graff told the students that employers will want to hire people who put in the work, and he encouraged them to avoid some of the things that may interfere with their path to success.

Deputy Rowe had the students repeat a Code of Conduct they learned as part of the EMPOWER program and presented them with certificates, a special bracelet and treats from the Madison Dairy Queen.

Rowe congratulated the students on their accomplishment and on having the education, resources, and support they need to be successful.