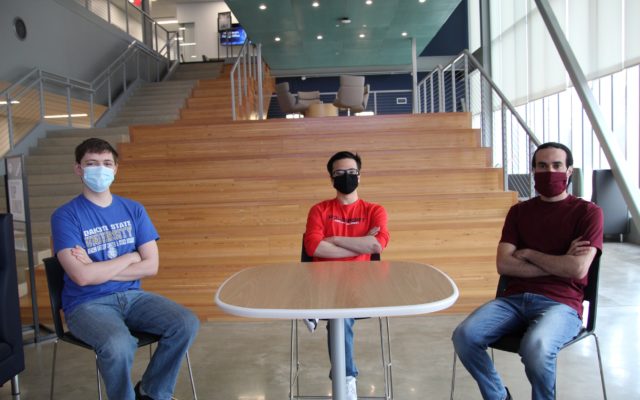 Dr. Pat Engebretson, Dean of The Beacom College, said that the Hack-o-Vation, as it was called,  was a way to keep students engaged over the winter break. The challenge was open to all Beacom College students, both on campus and online.

Engebretson said there were no limitations or restrictions on what a student could submit as long as it was related to their major or minor, so ideas could be technical, non-technical, a computer game, a model, or a process.

King’s project topic was spontaneous. Looking at some open source electronics platform kits he’d received as gifts, he was inspired to make an Internet-of-Things doorknob device to control access through a phone.  “The goal is to have a device that will allow locking or access control without having to replace an entire doorknob,” he said. King’s prototype was built from cardboard, but he hopes to use DSU’s 3-D printers to create a new version.

Kershaw’s project was an extension of a class project involving port scanning. (A port scanner application probes a server or host for open ports.)  “I wanted to build a port scanning application with a web-based User Interface (UI) and to learn more about port scanning (at a high level), and get some practice initiating scans from a web UI.”

Lansang’s project continued work he had done on defensive network tools during an internship with MITRE.  These tools can be expensive, creating conflicts over budget with information security management and cyber operations/IT departments. “I wanted to create a software that was affordable, that business of all sizes can use,” he said.

“It’s all about knowledge, and what you get from doing this,” Abdelmotaleb stated, “and looks good on a résumé.”