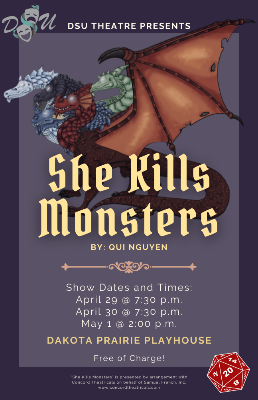 Dakota State University Theater is set to perform a production this weekend that was originally scheduled to be done two years ago, but was canceled because of COVID-19.  The play “She Kills Monsters” will now be performed this Friday, Saturday and Sunday at the Dakota Prairie Playhouse in Madison.

Ann Elder, DSU’s Director of Theater, said that students who were cast in the 2020 production wanted to play the same character for the 2022 production, but some roles needed to be re-cast because of student graduations.  A recent DSU alum, Laura Garcia, created the projection animations for the show for her final student showcase, and these will be featured in this year’s production.

The play’s storyline focuses on a character named Agnes, played by Maci Kasuske. After the death of her teenage sister Tilly (played by LJ Sanders), Agnes discovers a Dungeons and Dragons campaign notebook in Tilly’s room. In an effort to connect with her sister one last time, Agnes enters the imaginary world and uncovers levels of her sister that she didn’t know existed. Because the action-packed adventure is filled with homicidal fairies, demons, and monsters, students have been working with a professional fight choreographer, Caitlyn Grace, all semester.

Elder said the show does contain depictions of violence, mild sexual content, and mild profanity, and is considered PG-13.