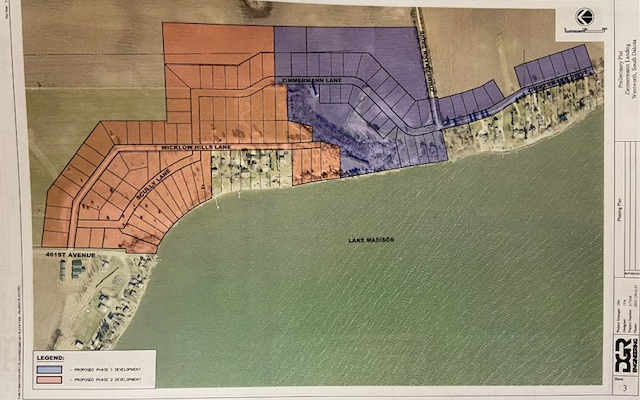 The Lake County Commission has approved a preliminary plat and development plan for Zimmermann Landing, a development being proposed on land on the north side of Lake Madison.

During their meeting on Tuesday, commissioners heard from Steve Van Buskirk, the developer for the property, which is owned by the Scully family, and several property owners in the area, who have concerns about the proposed development.

Residents of the Wicklow Hills development, which is located within the proposed Zimmermann Landing, presented a letter and expressed their concerns, including resident Tim Kenyon.

Kenyon said the residents are also concerned about the lakefront lot size of 50-feet that is being proposed by the developer for lots north of Wicklow Hills.  He said that the residents are also concerned about the county’s road in the area of the development – 461st Avenue – which is in poor shape already and will only be made worse by the increased traffic load on it.

Reck said that the volunteers in his department also provide emergency medical services to that area and is concerned how much of a strain that will put on them.

Matt Bock, an attorney for the Scully family, told commissioners that they are aware of the number of concerns there are with the development and they are working through those.  He said that the preliminary plat meets all of the minimum requirements of the county’s ordinances.