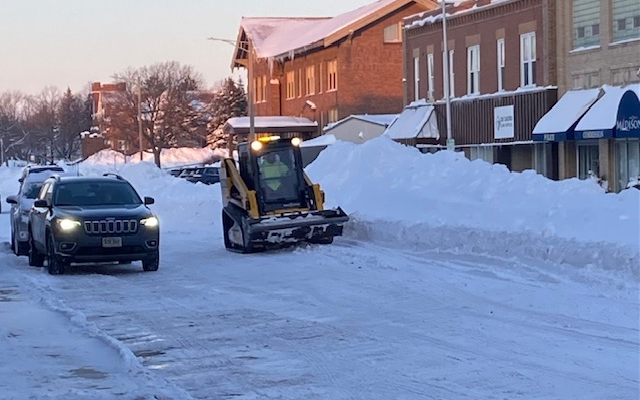 As residents in the city of Madison continue to clean up from this week’s winter storm, the city’s Public Works department has some reminders.  When clearing off driveways and sidewalks, also make sure to clean out fire hydrants if you have one on your property.  It should be cleared out three feet in all directions.  City crews will be going around to check hydrants as time allows.  Also, city crews are responsible for opening the roads and alleys, but residents are responsible for clearing the snow from their driveway entrances.  The city reminds residents also not to push or pull snow into roads or neighboring yards as this is illegal and offenders could be fined.

The City of Madison issued a Snow Alert as crews continue to remove snow from city streets.  Vehicles shouldn’t be parked on city streets until they have been cleaned from curb to curb.  The Madison Police Department issued just more than one-hundred tickets for vehicles in violation of the Snow Alert between Tuesday and Wednesday.

Local law enforcement were busy on Tuesday assisting motorists who got stuck trying to drive during the winter storm that dumped more than a foot of snow in the area.

Officers with the Lake County Sheriff’s Office and Madison Police Department responded to a total of close to twenty calls to assist motorists in about a twelve-hour timeframe starting around 9:00 Tuesday morning.  They also responded to close to two-dozen reports of vehicles that had been abandoned in the snow both in and out of the city during that same time.

Anyone who needs to travel and wants to know more about road conditions can call 511 or go online to sd511.org.

Weather-related announcements such as school late starts and closures can also be found on our website at amazingmadison.com.