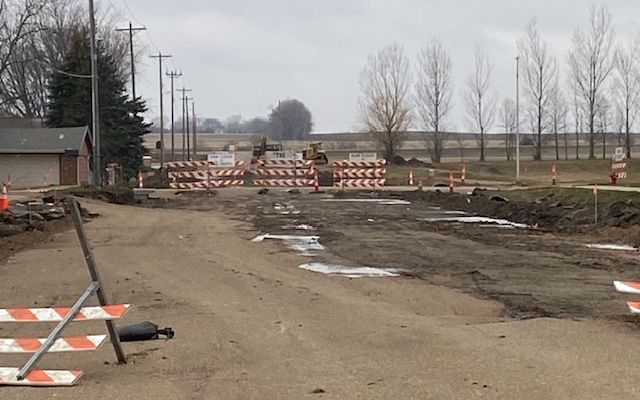 Madison city officials are planning to do what they can to have Northwest 9th Street open to traffic through the winter months.  In a special meeting on Thursday, commissioners voted to go with a Change Order for the project totaling more than 64-thousand dollars that would allow for the street to be usable, if weather permits the work that needs to be done.

City Engineer Weston Blasius with Banner Associates, and Ryan Hegg, Director of Engineering and Community Development for the city, told city commissioners Monday that they had found out from the contractor that because of some issues with the gas company getting there to move lines, the project was delayed and the street was not going to be completed yet this fall.

On Thursday, Blasius told commissioners that to get the street usable, additional sub-base material will be needed in two different segments of the street, starting with the block from Chicago Avenue west to West Avenue.

Blasius said that the next block west from West to Olive Avenue on 9th Street is a little better, but still will also require more sub-base material to make the road drivable.

He said that all of the sub-base material in the project that had been part of the original bid had been used, and the additional amount needed will need to be brought from Sioux Falls.  Because of that, the contractor is requesting a higher amount per ton to cover the cost.  Blasius said that cooperative weather and time is needed to try to get the work done.

Along with completing the work on these two blocks, there will also need to be work on the shoulders of the road from Olive Avenue west to Highway-81.  Commissioners are considering restricting trucks from driving on this portion of Northwest 9th Street if it is able to be opened all the way through for the winter.

Mayor Roy Lindsay said his preference was to just get the segment from Chicago to West Avenues usable, which would cost less and minimize the damage to the road before additional work can take place in the spring.

The four commissioners Thursday all expressed their desire to do whatever is necessary now to get the street open for the winter.  Some residents who live in the area attended Thursday’s meeting.  Commissioner Adam Shaw said he appreciated their patience while the city works through the issues with the project.