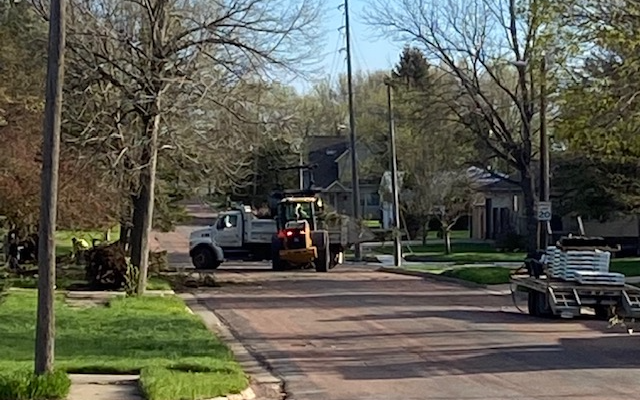 Crews have hauled thousands of loads of tree debris from the City of Madison since clean-up for the May derecho started almost four weeks ago.  Starting today, those crews will begin the second round of the city’s tree debris collection.  City Administrator Jameson Berreth said during Monday’s city commission meeting that this will be the final trip through the town for this collection.

Berreth said that residents who want their tree or storm construction debris picked up need to have it placed on the city boulevard.

Berreth said that the city’s Restricted Use Site, located northwest of Junius (JUNE-yus) is operating under normal hours now, but fees are still being waived for storm debris deliveries.  He said this is being evaluated on a weekly basis.  Tree debris can also be taken to the yard waste site on 456th Avenue, just north of the city’s wastewater treatment plant.

Mayor Roy Lindsay said that the city’s tree debris has been taken to a couple of different sites.

Lindsay said that the city has started working on the next step of removing the trees from the sites.

City crews will continue to work on trimming and stumping boulevard trees also, but this may not be completed until the fall so that the crews can take care of some of their other summer responsibilities.