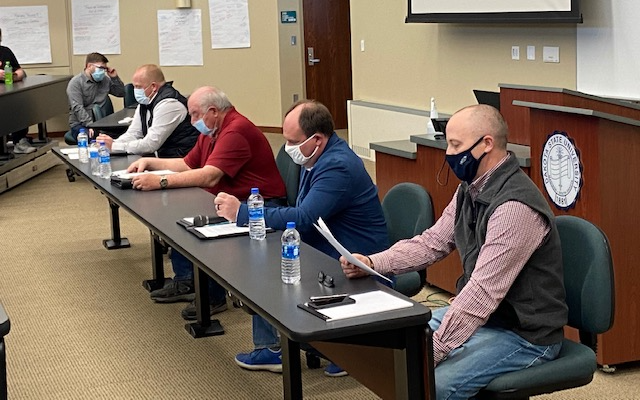 The three candidates in the upcoming Madison City Commission election took part in a forum on Wednesday night.  The forum was held in the TCB Auditorium on the Dakota State University campus in Madison and was also available via livestream on the Greater Madison Area Chamber of Commerce’s Facebook page.

Candidates Kelly Dybdahl, Jeremiah Corbin, and Robert Thill answered questions that had been submitted to Chamber Executive Director Eric Hortness, who served as the moderator for the forum.

One of the questions posed to the candidates involved the situation with the Madison Aquatic Center and the potential for it not to be open this summer because of repairs that are needed.

Incumbent commissioner Robert Thill, who is in his second term on the commission, explained where things stood at this time in regards to the repair work for the pool.

Thill said that they may have to work with the Community Center to look into options for swimming for people this summer.

Thill said that he was not aware of any of the issues until mid-August of last year after he was assigned to oversee the departments after the last election.

Candidate Kelly Dybdahl said that a pool is important to a community and he’d like to see Madison’s operational.

The candidate forum can be seen in its entirety on the Chamber’s Facebook page.  It will also be re-broadcast on a later date on KJAM Radio.