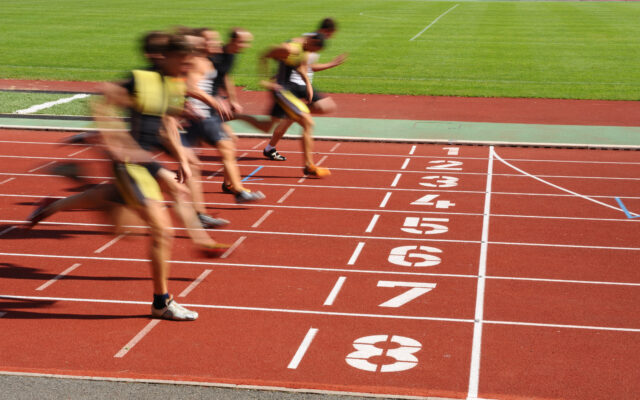 Roberts has five events remaining on Thursday, starting with the 110-meter hurdles at 10 a.m.  He also competes in the discus throw, pole vault, javelin throw, and concludes with the 1500-meter run.

The Trojan men’s 4 x 100-meter relay team was seeded No. 41 prior to Wednesday afternoon trials.  The team of Willie Hutchins, Trey Reindl, Riley Greenhoff, and SenQuavius Johnson finished fifth in the third heat with a time of 42.18 seconds.

DSU was the top South Dakota relay team to finish in the 4 x 100-meter relay, defeating Mount Marty.  The Trojans finished 28th overall and did not advance to the finals.

Conner Tordsen wrapped up the busy first day of the NAIA Outdoor Track & Field National Championships in the hammer throw.  He advanced to the finals after throwing 58.18 meters.

He earned a seventh-place finish after tossing 59.52 meters on his final attempt.

Dakota State collected two points in the team standings, earning a tie for 13th place.  Reinhardt and British Columbia currently lead after the first day with 10 points, despite being halted due to stormy weather Wednesday evening.

The Trojans continue their action Thursday with Roberts competing in the decathlon at 10 a.m. and Tordsen in the discus throw at 5 p.m.